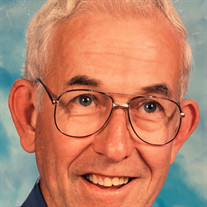 Robert L. “Bob” Harrod, 87, of Wapakoneta, died 9:40 p.m., Thurs. Dec. 19, 2019, at Wapakoneta Manor. He was born July 24, 1932, in Wapakoneta, the son of Walter L. & Mayme E. (Pfenning) Harrod, who preceded him in death. Survivors include, a nephew, Lee (Susan) Harrod, Wapakoneta, 2 nieces, Brenda (Terry) Hetrick, Oak Harbor, OH, & Lynn (Scot) Murchland, Birminham, AL, and other nieces, nephews, great nieces & great nephews. He was preceded in death by a brother and sister-in-law, Kenneth (Gladys) Harrod, and two half brothers, M. Merle Harrod, and Clyde D. Harrod. Bob worked at Superior Tube Co., Wapakoneta, and retired in 1997 from the Wapakoneta City Schools, after 25 years of service as a custodian at Northridge Elementary. A 1950 graduate of Blume High School, Bob served in the Korean War with the U.S. Army and was awarded the Bronze Star. He was a member of the First United Methodist Church, Wapakoneta, and a life member of the Wapakoneta V.F.W. Post 8445, Wapakoneta. He was also a member of the former Wapakoneta Elks #1170. Bob was an avid auto racing fan and would often travel to different parts of the country to watch racing. Funeral services will be 11:00 a.m., Sat. Dec. 28, 2019, at the Eley Funeral Home & Crematory, 1102 Lincoln Ave., (St. Rt. 501), Wapakoneta, with Pastor Josh Tissot officiating. Burial is to follow in the Greenlawn Cemetery, Wapakoneta, where military rites will be conducted by the Wapakoneta V.F.W., Post #8445. The family will receive family and friends 9:30 a.m. until time of the service, Sat. at the funeral home. Memorial contributions may be directed to the First United Methodist Church or St. Rita’s Hospice.

The family of Robert L. "Bob" Harrod created this Life Tributes page to make it easy to share your memories.

Send flowers to the Harrod family.