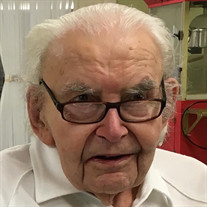 Robert “Bob” Leroy Niese, age 97, of Wapakoneta, passed away peacefully at 10:27 am on Tuesday, January 14, 2020 at Wapakoneta Manor in Wapakoneta, OH.  He was born on March 26, 1922 in Leipsic, OH to Hubert and Frances (Schroeder) Niese. He married Eula Heinl on June 13, 1946. Robert was known for his skilled woodworking and cabinetmaking.  He was most at home in his coveralls, whistling as he worked on his latest project in the basement.  He is survived by his children Michael Niese, Sonia (David) Stroh, and Lora (Jim) Brown.  Robert will also be lovingly remembered by his grandchildren Sarah (Tom) Lipps, Jonathan (Ashley) Stroh, Amy (Clint) Bailey, Emily (Andy) Nentwich, Kevin Brown, Megan Brown, and five great-grandchildren Noah Lipps, Evan Lipps, Annalise Lipps, Emmaline Lipps, and Oliver Nentwich. He is also survived by his sisters Margaret (Niese) Huchinson, Ardella (Niese) Oksanen, and Theresa (Niese) Nagel. He is preceded in death by his wife of 71 years, Eula Mae Niese and siblings Mathias Niese, William Niese, Mildred (Niese) Bowsher, Edna (Niese) Williams, Alvin Niese, Linus “Dick” Niese, and Gilbert Niese.   Robert was above all things a loving husband, father, and grandfather.  He worked as a tool and die maker at Clark Equipment and General Dynamics.  He was a member of St. Joseph Catholic Church in Wapakoneta where he sang in the Resurrection Choir, and was also a member of the Knights of Columbus.  Robert was a graduate of St. Joseph High School. He will be remembered fondly as his family continues to enjoy his beautifully crafted furniture.   Mass of Christian Burial will be 10:30 a.m., Monday January 20, 2020 at St. Joseph Catholic Church, Wapakoneta with Rev. Sean Wilson officiating.  Burial is to follow in the St. Joseph Catholic Cemetery, Wapakoneta. The family will receive friends 2-5 p.m., Sunday January 19, at the Eley Funeral Home and Crematory, 1102 Lincoln Ave., (St. Rt. 501) Wapakoneta.  Memorial contributions can be directed to St. Joseph Catholic Church or the American Cancer Society.

The family of Robert L. "Bob" Niese created this Life Tributes page to make it easy to share your memories.

Send flowers to the Niese family.