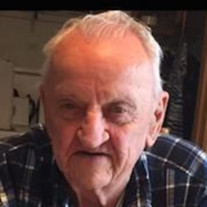 Robert A. (Bob) O’Neal, 85, of Wapakoneta, died 11:38 p.m., Sat. Oct. 2, 2021, at Mercy Health- St. Rita’s Medical Center, Lima. He was born Dec. 24, 1935, in St. Marys, OH, the son of the late Jess O’Neal and Mary A. (Skinner) O’Neal Berger. On June 21, 1959, he married Sonja N. Chilcoat, and she survives. Other survivors include, 2 children, Terry (John) Hernandez, Wapakoneta, Robert A. Jr. (Cheryl) O’Neal, Ladson, SC, 10 grandchildren & 4 great grandchildren. In addition to his parents, he was preceded in death by a son, Travis A. O’Neal, 2 brothers and 1 sister. Bob retired from the U.S. Navy after 30 years of service. He later worked at Grumman, and was a foster care advocate. He also worked as a truck driver at Continental Truck Lines, Sidney. He was a member of the Wapakoneta V.F.W. Post #8445. Bob enjoyed hunting, bowling, cribbage, and playing cards. He also enjoyed riding his three-wheeler. In keeping with Bob’s wishes, there are to be no public services. Arrangements are under the direction of the Eley Funeral Home & Crematory, Wapakoneta, where condolences may be expressed at www.eleyfuneralhomeandcrematroy.com.

The family of Robert A. 'Bob' O'Neal created this Life Tributes page to make it easy to share your memories.

Send flowers to the O'Neal family.