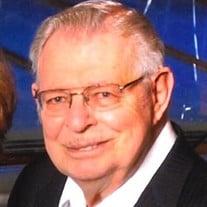 Roger L. Bertrand, 83, of Sidney, passed away peacefully at 12:55 AM, Wednesday, Feb. 19 at Ohio Living Dorothy Love, Sidney, with his wife, Judy, by his side. He was born Nov. 26, 1936 in Auglaize Co., Ohio, son of Leonard K. Bertrand and Dorothy C. Newland Bertrand (Weatherby) and grew up near Santa Fe, Ohio. He was married to his wife, Judy Kantner Johnson, on April 15, 1993, who survives him. Originally from Wapakoneta, he has lived in Sidney for the past 27 years. Other survivors are his son, Kevin Bertrand of Wapakoneta, and his daughter Linda Bertrand Shade and her husband Roger Shade, of Wapakoneta. Grandchildren are Meghan Shade of Celina, Lucas Shade, and Nathan Shade of Wapakoneta. His two surviving siblings are sisters, Shirley Bertrand Core and her husband Jack Core of Lima, and Marilyn Bertrand Boyd and her husband Thomas Boyd of Sidney. His brother-in-law is Douglas Kantner and his wife Nancy. Stepchildren are Jeff Johnson and his wife Karin of Findlay, OH, and Stephanie Johnson Artman and her husband Dan Artman of Gilbert, Arizona.   He was preceded in death by his parents, one brother, L. Kenneth, Bertrand Jr. and Kenneth’s wife Marie, and a brother-in-law, Vernon Caplinger. He was previously married to Esther Bertrand of Wapakoneta who died in 2013. Until his retirement in 1999, Roger had been employed by G.A. Wintzer & Son Co. of Wapakoneta for over 30 years. He enjoyed the camaraderie of working with his co-workers and spending time with relatives and friends. Roger was a 1955 graduate of Waynesfield- Goshen High School. He especially liked being outdoors, loved nature, liked fishing when he could, and enjoyed watching sports programs on TV. For years Roger also looked forward to meeting his friends in the mornings at the Waffle House. He was an avid fan of the Ohio State Buckeyes, especially football. He liked watching NASCAR races especially when Jeff Gordon was driving. Going from not being an avid traveler before, he came to really enjoy the trips and cruises he was able to take with his wife, Judy. Traveling then became one of the highlights of his life, especially going to Germany and its surrounding countries. Roger was a member of Loyal Order of the Moose, #1533, Indian Lake, and had previously been a member of the Fraternal Order of the Eagles, Aerie #691, Wapakoneta, for over 25 years. He was of Protestant faith and had previously been a member of the First United Methodist Church of Wapakoneta. Recently he had greatly enjoyed the visits from his Hospice minister, Pastor Ed Ellis.   Funeral services will be 3:00 p.m., Sat. Feb. 22, 2020, at the Eley Funeral Home & Crematory, St. Rt. 501, Wapakoneta, with Pastor Josh Tissot officiating. Burial is to follow in the Greenlawn Cemetery, Wapakoneta.

The family of Roger L. Bertrand created this Life Tributes page to make it easy to share your memories.

Send flowers to the Bertrand family.