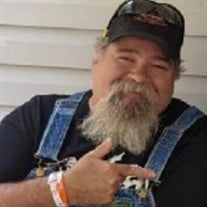 Scott W. Stombaugh, 59, of Wapakoneta, died Sun. afternoon Aug. 15, 2021, from injuries sustained in a motorcycle accident. He was born Oct. 13, 1961, in Lima, OH, the son of Kathy Stombaugh and Jerry (Carol) Stombaugh. His mother preceded him in death and his father survives. He was formerly married to Rita Stombaugh. Survivors include, 3 children, David (Ashley) Stombaugh, Wapakoneta, Amanda (Adam) Cox, Savannah, GA, Britny Breidenbach, Wapakoneta, 7 grandchildren, a sister, Teresa (Bill) Craft, Cridersville, OH, significant other, Karen Jones, several nieces and nephews, many friends, Scott retired from the maintenance department at Superior Metals. He was a member of the Fraternal Order of Eagles, Wapakoneta, Aerie #691 and a 1981 graduate of Wapakoneta High School. He left this Earth doing what he loved the most – riding his Harley. Memorial Services will be at 6:00 p.m., Thurs. Aug. 19, 2021 at the Eley Funeral Home & Crematory, St. Rt. 501, Wapakoneta. The family will receive friends from 2-6 p.m., at the funeral home. Memorial contributions may be directed to the National Kidney Foundation. Condolences may be expressed at www.eleyfuneralhomeandcrematory.com.

The family of Scott W. Stombaugh created this Life Tributes page to make it easy to share your memories.

Send flowers to the Stombaugh family.