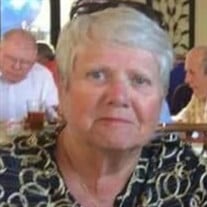 Obituary notice of Sue Ellen Kohler, Dateline, Wapakoneta, OH, Sue Ellen Kohler, 76, of Wapakoneta, died 11:10 p.m. Fri. Sept. 11, 2020, at her residence. She was born Oct. 3, 1943, the daughter of James P. & Betty Margaret (Chiles) Dearbaugh, who preceded her in death. On July 14, 1962, she married Ronald L. Kohler, and he survives. Other survivors include, 2 sons, Aaron (Jackie) Kohler, New Haven, IN, Ian (Dani) Kohler, Wapakoneta, OH, 8 grandchildren, Olivia, Emma, Jeffery, Jenna, Kalissa, Sarah, Ellana, Kylah, honorary grandson, Brayden, 2 brothers, James Steven (Jackie) Dearbaugh, Brent (Karen) Dearbaugh, Sue Ellen was elected the Auglaize County Clerk of Courts in 1988, and she retired from that position in June of 2011. She has the honor of being the longest elected female politician in Auglaize County. She was a former member of the Ohio Clerk Association and served as President in 1997; served as the Governor Appointee on the Automated Title Processing System Board representing the Clerks; was a former member of the Ohio Association of Municipal/County Clerks; former member of the International Association of Clerks, Recorders, Election Officials and Treasurers where she became Ohio’s State Director and also became the Director at Large for the Clerk’s Division. She was a member of the First United Methodist Church, where she was active in the Chancel Choir and in the Church Bell Choir, as well as a member of Good Shepherd United Methodist Church in North Fort Myers, Fl, where she played handbells. She was member of the Order of the Eastern Star, both the Wapakoneta Koneta Chapter #385 and Spencerville Chapter #130, where she was the Past Worthy Matron, Past District Deputy, and Past President of the Association. She was a member Auglaize County Alumni Band and the Lima Symphony Orchestra. She enjoyed entertaining at her homes in Ohio and Florida. She was an avid Wapakoneta Redskin and Ohio State fan. Her greatest joy came from being involved in all aspects of her grandchildren’s lives. You would often hear her cheering from the crowd at any of their games or functions. Funeral services will be 10:30 a.m., Thurs. Sept. 17, 2020, at the First United Methodist Church, Wapakoneta, Pastor Josh Tissot, Pastor Mike Westbay, Pastor Scott Fetter officiating. Burial will be at a later date in the Greenlawn Cemetery, Wapakoneta. The family will receive friends from 4-8 p.m., Wed. at the Eley Funeral Home & Crematory, St. Rt. 501, and 1hr prior to the service on Thurs. at the First United Methodist Church, Wapakoneta Redskin & Ohio State attire is welcomed. There will be an Order of the Eastern Star Memorial Service, held at 7 p.m. Wed. at the funeral home. Memorials may be directed to the First United Methodist Church or the Wapakoneta Athletic Booster Club. Condolences may be expressed at www.eleyfuneralhomeandcrematory.com.

The family of Sue Ellen Kohler created this Life Tributes page to make it easy to share your memories.

Send flowers to the Kohler family.