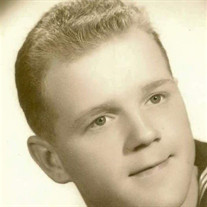 Thomas A. Bendele, 78, of Wapakoneta, died 3:29 p.m., Sun. Feb, 18, 2018, at the Cleveland Clinic. He was born Feb. 11, 1940, in Ft. Jennings, OH, the son of Isidore N. & Gertrude H. (Ricker) Bendele, who preceded him in death. On July 2, 1963, he married Shirley A. Haney, and she survives. Other survivors include, 2 children, Teresa (Douglas Paynter) Bendele, Painseville, OH, Tony (Shelly) Bendele, Wapakoneta, 3 grandchildren, Amber Bendele, Andrew Bendele, & Aimee Bendele, 3 great grandchildren, Payton, Lily, & Violet Bendele, siblings, Jeannette (Norbert) Albers, Celina, LaDonna (LaVern) Klawitter, Wapakoneta, Norma Prenger, Minster, & Geraldine (Ron) Brunson, MO. He was preceded in death by a grandson, Adam Bendele, an infant brother, Richard Bendele, and a brother-in-law, Eddie Prenger. Tom retired in 2002 after 26 years of service in skilled trades at Dana Corp, Lima. Before that he worked 18 years as an engineer at Koneta Rubber Co., Wapakoneta. He was a member of St. Joseph Catholic Church, Wapakoneta, and the U.A.W. Local #1765. From 1957 to 1961, he served in the U.S. Navy. While in the Navy, he served on the USS Marias, which was the first ship to be stationed at Barcelona, Spain. Tom designed and built his own tractor. He could repair anything, and enjoyed tinkering in his garage, gardening and doing yard work. His family will greatly miss their husband, father, grandfather & great grandfather. Mass of Christian Burial will be 10:30 a.m., Fri. Feb. 23, 2018, at the St. Joseph Catholic Church, Wapakoneta, with Rev. Patrick Sloneker officiating. Burial is to follow in the St. Joseph Catholic Cemetery, where military rites will be conducted by the Wapakoneta V.F.W. Post #8445. The family will receive friends 2-4 & 6-8 p.m., Thurs. at the Bayliff & Eley Funeral Home, 1102 Lincoln Ave. (St. Rt. 501) Wapakoneta. Memorial contributions may be directed to St. Jude Children’s Research Hospital or the Wapakoneta V.F.W. Post #8445.

The family of Thomas A. Bendele created this Life Tributes page to make it easy to share your memories.

Send flowers to the Bendele family.