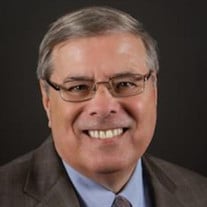 Thomas S. Finkelmeier, 74, passed away on May 23, 2021 after a prolonged illness. He was born in Cincinnati, Ohio on December 20, 1946 to the late Dr. Louis J. and Marjorie (Thompson) Finkelmeier. The family moved to Celina, Ohio in 1955 and that is where he grew up with his siblings Louis J. (Carole) Finkelmeier Jr., James D. (Maureen) Finkelmeier, Betty A. Finkelmeier, William R. (Terri) Finkelmeier and Mary E. (Dan) Havener, who all survive. Tom attended Celina High School, then obtained a Bachelor of Arts in history from the University of Cincinnati in 1968. He considered attending law school like his older brother Lou, but was drafted to serve in the United States Army and completed a one-year tour in Vietnam. Tom was extremely proud to serve his country, and was decorated for heroism in combat. While in the Army he married his long-time sweetheart Diana K. Youngs on July 26, 1969 while on liberty in Hawaii, and she survives. After Vietnam, he intended to spend a month relaxing, but his father Dr. Lou said “W-K with OR in the middle. You are scheduled to start adjuster training school at Celina Insurance on Monday morning.” In retrospect, Tom often said that was the best thing he could have done to put his war experience behind him. He had good reason to work. As the years passed along came Thomas S. (Sarah) Finkelmeier Jr., Jodi L. (Jeff) Muller and Kristi L. (Jody) Papst. Tom was a passionate family man who was known to say many times that his family was everything to him. Seeking more opportunity to provide for his young family, he moved to Wapakoneta, Ohio in 1977 to join an insurance agency. This was where his talents were put to best use. Tom spent nearly 40 years providing service to others as an independent insurance agent at the Finkelmeier Insurance Agency in Wapakoneta. His desire for professional excellence knew no equal. That coupled with his winning personality and integrity made him successful. A lifelong baseball card collector, Tom realized the need for an insurance product for sports memorabilia collectors. In the early 1980’s he wrote the original sports memorabilia insurance policy. Today Finkelmeier Insurance is the largest agency providing insurance to collectors and dealers of memorabilia of all types, nationwide. Over the years many people were surprised to learn that such a gregarious and warm man was never happy in public settings, preferring the company of his family and a few close friends. He was born to be a Grandpa; Papa deeply loved his eight grandchildren: Josephine J. Muller, Gabriele C. Muller, Gage L. Papst, Wyatt T. Papst, Thomas S. Finkelmeier III, Cameron A. Finkelmeier, Alexandria A. Finkelmeier and little Henry J. Finkelmeier. Tom was greatly loved and will be missed dearly by his large family and many friends. Visitors may call at the Eley Funeral Home on Thursday, June 3rd from 5:00 PM to 8:00 PM. A funeral service will be held at 10:30 AM, Friday, June 4th at First United Methodist Church in Wapakoneta, with interment at Greenlawn Cemetery immediately after. The family will also receive visitors one hour prior to the service at the church. Donations may be made in Tom’s honor to the First United Methodist Church in Wapakoneta, or to the Lewy Body Dementia Association at www.lbda.org/donate

Thomas S. Finkelmeier, 74, passed away on May 23, 2021 after a prolonged illness. He was born in Cincinnati, Ohio on December 20, 1946 to the late Dr. Louis J. and Marjorie (Thompson) Finkelmeier. The family moved to Celina, Ohio in 1955 and... View Obituary & Service Information

The family of Thomas S. Finkelmeier created this Life Tributes page to make it easy to share your memories.

Send flowers to the Finkelmeier family.