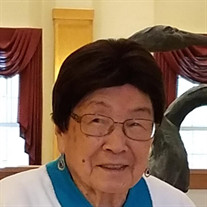 Tomoe Fujii Doenges, formerly of Davenport and Wapakoneta, Ohio, passed away Thursday, December 17, 2020 at her son’s home in De Pere, Wisconsin after a short illness. She was born March 20, 1926 in Japan to Mistuko Fujii and Hayaka Watanabe. She emigrated to the United States in 1962. She married Nicholas “Nick” Doenges on February 18, 1963. He passed away on February 12, 2016. Due to Nick’s job, Tomoe moved 18 times across the country, with their longest stay in Davenport, Iowa. After Nick’s retirement in 2008, they moved back to his hometown of Wapakoneta, Ohio. In 2016, she moved to Green Bay, Wisconsin, to be closer to her son, Vern. Tomoe enjoyed sewing and crafts in her younger years and tried her hand at bowling. She even had a very short stint as a substitute Japanese instructor at Rock Island High School. She attended ESL classes in Davenport because “I enjoy learning.” She was a connoisseur of food, especially all-you-can-eat buffets. She is survived by her children: Vernon (Georjeanna) Doenges, De Pere, Wisconsin; Donna (Richard) Lindberg, Reynolds, Illinois; her grandchildren, Nicholas (Lindsey) and Daniel (Laira) Lindberg; Jordan and Julia Doenges; grand dog, Beau Doenges; and future great-granddaughter, Sadie Grace Lindberg; her sisters-in-law Nina Stuckey and Nell (Bill) Chadwick; nephews, Junichi Fujii and Akira Fujii; cousin, Kumiko Okamoto; and many friends that she made along the way. She was preceded in death by her husband, her parents, her brother, and her sister-in-law, Noreen Wise. Due to the holidays and Covid-19, there will be no visitation or funeral services. A burial service will be held Saturday, January 9, 2021 at St. Joseph’s Cemetery, Wapakoneta. Memorials may be made to a favorite charity. Online condolences may be expressed at www.eleyfuneralhomeandcrematorycom.

Tomoe Fujii Doenges, formerly of Davenport and Wapakoneta, Ohio, passed away Thursday, December 17, 2020 at her son&#8217;s home in De Pere, Wisconsin after a short illness. She was born March 20, 1926 in Japan to Mistuko Fujii and Hayaka Watanabe.... View Obituary & Service Information

The family of Tomoe Fujii Doenges created this Life Tributes page to make it easy to share your memories.

Send flowers to the Doenges family.