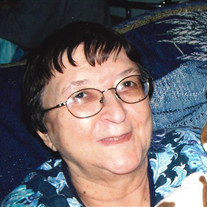 Vivian L. “Nub” Huebner, 79, of Wapakoneta, died 3:15 p.m., Mon. June 24, 2019, at her home with her family at her side. She was born Dec. 28, 1939, in Auglaize Co., Oh, the daughter of Russell & Audrey (Colton) Wagner, who preceded her in death. On Aug. 31, 1955, she married Ronald E. Huebner, and he died Aug. 15, 2008. Survivors include, 5 children, Carol Lee, Tom (Theresa) Huebner, Tod (Lori) Huebner, Ronda (Dave, Jr.) Kachelries, all of Wapakoneta, and Lisa Greene (Keith Joseph), Cridersville, 31 grandchildren, 28 great grandchildren, her extended family, Jody Porter, and Amy Huebner(dec). She was preceded in death by a great granddaughter, 7 older brothers & sisters. Nub worked for Wapakoneta Manor and retired after 32 years of service. She was a member of the First United Methodist Church, Wapakoneta. According to her family Nub was a great cook, and enjoyed reading and camping. She most enjoyed spending time with her grandchildren & great grandchildren. Funeral Services will be 6:00 p.m., Thurs. June 27, 2019, at the Eley Funeral Home and Crematory, 1102 Lincoln Ave. (St. Rt. 501), Wapakoneta, with Pastor Robert Sweeney officiating. In accordance with Nub’s wishes, she will be cremated following the service and her cremated remains will be buried at Greenlawn Cemetery, at a later date. The family will receive friends from 2-6 p.m. Thurs. at the funeral home. Condolences may be expressed at www.eleyfuneralhomeandcrematory.com.

The family of Vivian L. "Nub" Huebner created this Life Tributes page to make it easy to share your memories.

Send flowers to the Huebner family.