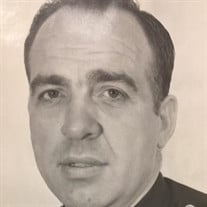 William J. “Bill” Doty, Sr., 84, of Wapakoneta, passed away 12:10 p.m., Tues. Feb. 13, 2018, at Mercy Health- St. Rita’s, Lima. He was born July 29, 1933, in Wapakoneta, the son of Theodore J. “Pete” & Ruth L. (Heckler) Doty, who preceded him in death. On May 22, 1958, he married Barbara Lou Coats, and she survives. Bill was a graduate of Blume High School, Wapakoneta and worked as a welder at BLH, Lima. He was a veteran of the U.S. Army and served in Germany during the Korean Conflict. While in the Army, Bill was a welder on tanks in the battle field. Bill also worked for Bob & Henrietta Miller at Miller’s Laundry as a route driver for 10 years. In 1965, he became a deputy with the Auglaize Co. Sheriffs Department and continued in that capacity until 1972. He retired from the City of Wapakoneta Waste Water Treatment Department in 1992. After his retirement, Bill and Barbara traveled for 22 years during the winter months. His memberships included the Wapakoneta V.F.W. Post #8445, and the Fraternal Order of the Eagles, Aerie #691, Wapakoneta. Survivors include, 3 sons, William J. Jr., and Pam (Wagner) Doty, and their daughters, Ashley (Tony) Baber, Adrian (Brock) Whetstone, Alexandria Doty, Steven Todd and Becky (McCullough) Doty, and their sons, Mitchel and Casey Doty, Michael and Ashley (Rohrbacher) Doty, Scott A. and Ty (Knoch) Doty, and their children, Taylor & Jeremy Doty, 10 great grandchildren, a brother, John and Joan Doty, Trenton, NJ, 3 brothers-in-law & 4 sisters-in-law, many nieces & nephews. He was preceded in death by a sister, Betty (Doty) Cummins, 4 brothers-in-law, and 2 sisters-in-law. Mass of Christian Burial will be 10:30 a.m., Sat. Feb. 17, 2018, at the St. Joseph Catholic Church, Wapakoneta with Rev. Sean Wilson officiating. Burial is to follow in the St. Joseph Catholic Cemetery, Wapakoneta, with military rites conducted by the Wapakoneta V.F.W. Post #8445. There will be no visitation. Arrangements are being conducted by the Long & Folk Chapel of the Bayliff & Eley Funeral Home, Wapakoneta. Memorial contributions may be directed to the American Cancer Society or the American Lung Association.

The family of William J. Doty Sr. created this Life Tributes page to make it easy to share your memories.

Send flowers to the Doty family.