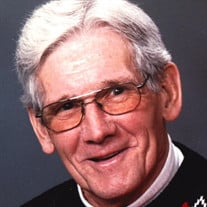 William H. “Bill” Fielder, 91, of rural Wapakoneta, died 10:30 p.m., Sun. Nov. 29, 2020, at his residence with his family at his side. He was born April 28, 1929, in Waco, KY, the son of Charles & Geneva (Golden) Fielder, who preceded him in death. On May 30, 1952, he married Susann Rawlins, and she died March 13, 2005. Survivors include, 3 daughters, Angela (Bill Kinkead) Fielder, Columbus, OH, Sherry Fielder, Wapakoneta, Ann (Jay) Goudy, Dayton, OH, a family friend, Brooke Copeland, 2 grandchildren, Jeremy (Sherri) Goudy, William (Jamie) Goudy, 4 great grandchildren, Kieran Goudy, Wyatt Goudy, Allie McKivison, Olivia Ayers. He was preceded in death by a sister, Edith Mason. Bill worked as a livestock order buyer at Producers Livestock, Wapakoneta. Later he worked at Greenlawn Cemetery. He was a U.S. Army veteran. Bill enjoyed sports, and was an avid fan of the Cincinnati Reds and Bengals, and the University of Kentucky Wildcats basketball team. He also enjoyed repairing things. Private family graveside services will be held at the Greenlawn Cemetery, Wapakoneta, with Pastor Melodi Hagen officiating. Military rites will be conducted at the cemetery by the Wapakoneta V.F.W. Post #8445. In lieu of flowers, memorial contributions may be directed to Trinity Lutheran Church, Moulton, OH. A public celebration of Bill’s life will be held at a later date. The Eley Funeral Home & Crematory, Wapakoneta, is in charge of the arrangements, where condolences may be expressed at www.eleyfuneralhomeandcrematory.com.

The family of William H. Fielder created this Life Tributes page to make it easy to share your memories.

Send flowers to the Fielder family.